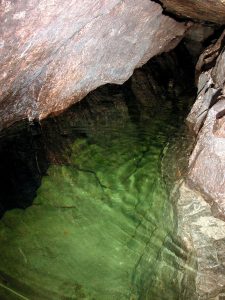 The underground stream that normally flows through the seventh level actually is part of the water table that underlies the area. The level of this stream is controlled primarily by the rate of percolation, surface amount of precipitation and consequent runoff, mainly via sinkholes, sinking streams, and vertical fractures in the limestone. The temperature of the water is a constant 48.9˚F (9.7˚C).

The water is of good quality (potable) and should remain so if proper environmental practices are followed within the recharge area.

Physio-chemical and spectrographic analysis of water samples collected by Dr. Thomas Page, Aquatic Biologist/Limnologist, revealed very low oxygen content and high carbon dioxide content. If this were a surface stream, the oxygen and carbon dioxide concentration would be naturally corrected and within normal parameters.

These imbalances account for the lack of larger population of aquatic flora and fauna in Ole Mist’ry River.

Major fluctuations in the water level can and do occur as was evident July 4, 1969 when the area received approximately 9 inches (23cm) of rain in four hours. In two days the water rose about 130 feet (40 meters) to the cavern entrance level. Extensive surface flooding occurred in the entire area. Sinkholes became fountains, driven by hydrostatic pressure, as the subsurface groundwater system reached saturation and filled beyond capacity. Temporary surface river flow systems then developed as the water flowed in a northerly direction toward Lake Erie across several thousand acres of farmland. The entire area experienced major flood conditions for several days and limited flooding for an additional three weeks. Bellevue, four (4) miles (6KM) north, was inundated. The water in the cave took almost four (4) months to return to its pre-flood level. 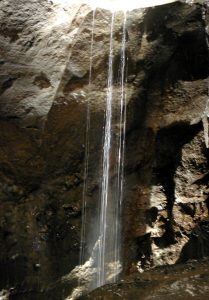 The most recent flooding north and south of Bellevue occurred during the spring and summer months of 2008. The Ohio Department of Natural Resources Divisions of Geologic Survey, Water, and Soil and Water, investigated the extent and causes of the flooding. The results of the study were published – Karst Flooding in Bellevue, Ohio and Vicinity-2008.

It is interesting to note that flooding has very little effect on the cave itself. The water rises slowly at a rate of about one-foot (.3 meter) per hour or less and there is little or no apparent horizontal flow as it rises into the upper levels. Damage however, does occur to the extensive electrical system and entails considerable repair and replacement following inundation.

One of the mysteries associated with the high water is the tendency of light bulbs and floodlights to fill with water. These bulbs are sealed at the factory and it is theoretically impossible to occur—but it does! Great pressure is undoubtedly the culprit as the bulbs in the lower rooms or levels are 100 feet (30.5 meters) to 160 feet (49 meters) below the water surface during total flooding.